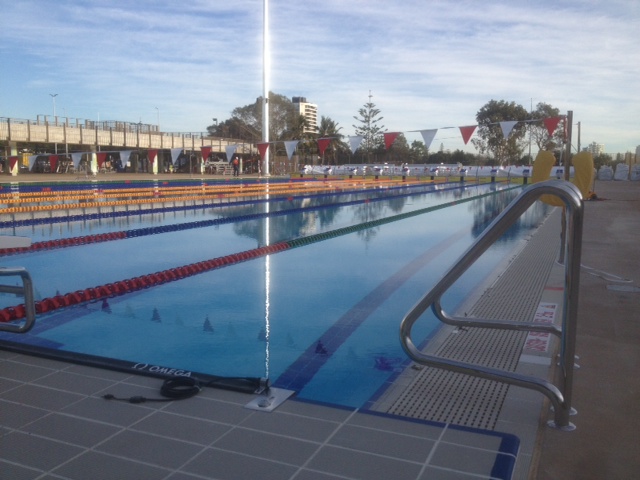 Swimmers from all over the world freestyled, backstroked, breast stroked and butterflied down the 50-metre pool at the 2018 Gold Coast Commonwealth Games last week. It was a thrilling five days as athletes powered through the water, pushing their bodies to the limit. Ten thousand spectators filled the stands, flooding the Optus Aquatic Centre with cheers of support.

Ceramic Solutions are proud to have played a part in the completion of the Optus Aquatic Centre, a world-class swimming and diving facility. Built in the 60’s, the Southport pool complex was revitalised, renewed and renamed in 2013. It was completed just in time for the 2014 Pan Pacific Swimming Championships. Since then, the pools have been splashed, raced and jumped in by thousands.

Our tiles trace the frame of the pools and the surrounding centre. The strategy behind the centre’s transformation was to bring the outdoor pools in, enhancing usability. Featuring two 50-metre ten lane competition pools, a 25-metre pool, a dive pool, a program pool, two recovery pools and a splash pool, the Optus Aquatic Centre is professionally equipped. The venue, built for events similar to the calibre of last week’s racing, was awarded Building of The Year and received the People’s Choice Award at the 2015 Gold Coast/Northern Rivers Architecture Awards.

With so many swimming professionals gracing the pool, we are honoured to have contributed to a centre where athletes and para-athletes can compete on the world stage!